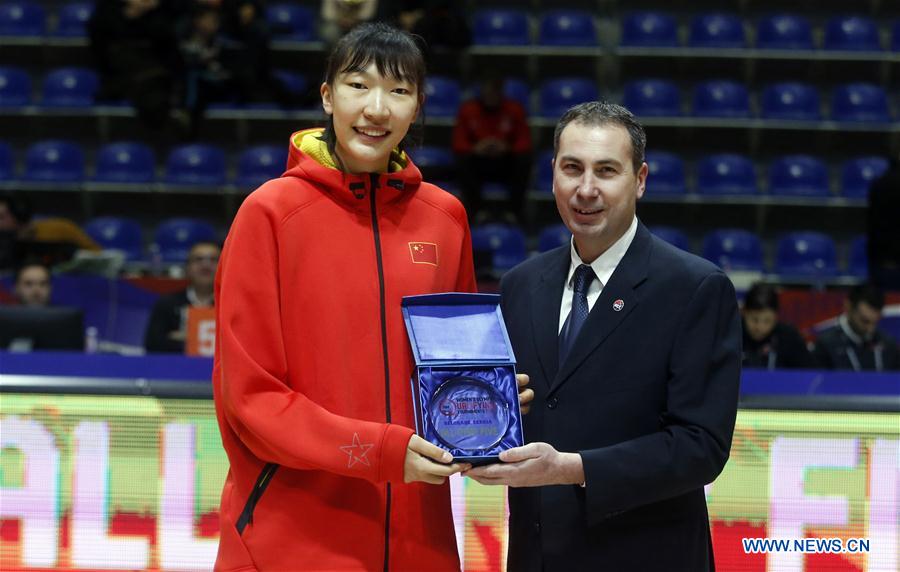 A delicacy for basketball fans were the three-pointers of Li Meng and Huang Sijing, together with attractive scoring and rebounding of Han Xu - a trio that entertained audiences at the Aleksandar Nikolic Hall during previous matches against Britain and Spain.

If it weren't for the coronavirus epidemic, the matches within the Group B would take place in Foshan, with China as the host, but they were moved to Serbia's capital in last minute.

After convincing performance against Britain, as well as European champion Spain, China breezed past South Korea to confirm the perfect streak at the qualification tournament despite all difficulties.

After the game Li Meng, who scored 20 points, told Xinhua: "Although we won the (Olympic) ticket early, this game was very important to us, so we still did our best and went for the victory. We have met South Korea once before in past, and we are familiar with each other. This time, no matter what changes our opponents did, we just need to be good at ourselves and stick to the style of Chinese women's basketball team. The advantage of the Chinese women's basketball is defense and counterattack".

Asked about further preparations for the Olympic Games, she said: "First of all, we are a very young and very energetic team, so no matter who our opponents are in the Olympic Games, we pay attention to the process of the game and show our training level, and don't think of the results - we just rely on ourselves".

Huang Sijing reminded how South Korea edged out China at the FIBA Women's Olympic Pre-Qualifying Tournament for Asia and Oceania by 81-80, recalling that her team prepared for one month to strike back.

"We came here to win this game. We executed everything our coach prepared. We did very well today," she commented.

"We want to be one of the best teams in the world, so that is why we know importance of every game and we play every game very well," Huang explained.

China coach Xu Limin said that his team managed to keep the motivation after winning the Olympic ticket the day before with a victory over Spain, which was crucial in order to win the third match.

"We did good at this tournament, and for the team, it is like stepping into another level," he said and predicted a great future for his team.

He reminded the transfer of the tournament from Foshan to Belgrade, saying that it created difficulties, but also inspired the team, and "the difficulties help a young team mature faster."

Asked if his team can be the No. 2 in the world, after United States, he said: "We are young, so we have this ambition. We show what is Chinese basketball spirit. We fight in every game, and that's why we have shown good performance. But we still have a long way to go and this is just the beginning."